Cellulose is the oldest and most abundant natural polymer compound on earth and is an inexhaustible and most valuable natural renewable resource for mankind. Cellulose is inexpensive, biodegradable, low calorie, non-toxic and biologically compatible. The base ring of the cellulose macromolecule is dehydrated glucose with the molecular formula (C6H10O5)n. It contains 44.44% carbon, 6.17% hydrogen and 49.39% oxygen, and each glucose residue ring contains three alcoholic hydroxyl groups, including two secondary alcoholic hydroxyl groups and one primary alcoholic hydroxyl group, which play a decisive role in the properties of cellulose. Cellulose can be chemically modified to give a range of cellulose derivatives.
Natural cellulose is prepared by alkalinisation, neutralisation by etherification, purification and drying to obtain cellulose ethers. Cellulose ether is one of the important derivatives of cellulose. It can be widely used in food, medicine, cosmetics, building materials, paper, paint, textile printing and dyeing, daily use chemicals, petroleum extraction and other industries. It has solubility, viscosity, stability, non-toxicity and biocompatibility. There are different classifications of cellulose ethers depending on the type of substituent, ionisation and solubility differences. The substituent group on a cellulose ether often has a significant influence on its properties. Depending on the substituent group, there are MC, HEC, CMC, HPMC, HEMC and other types of cellulose ethers. This paper focuses on the differences in the physicochemical properties and applications of HPMC, HEMC in the construction industry. 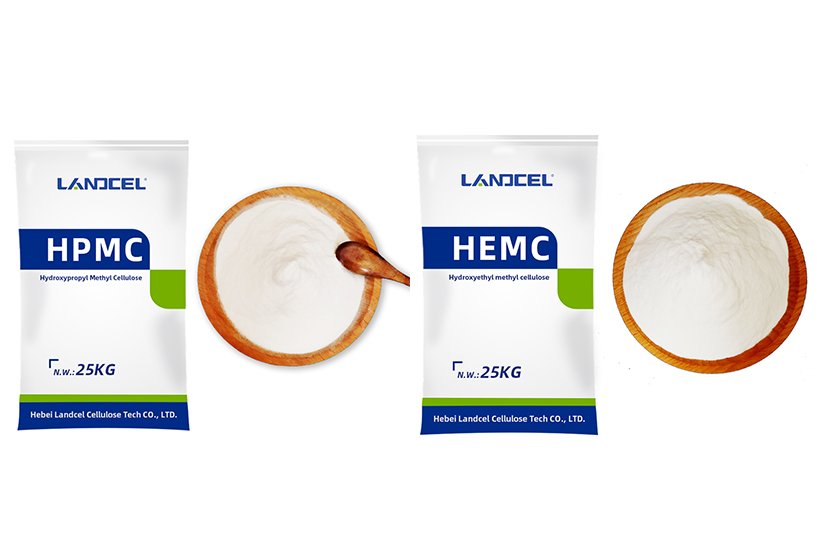 Hydroxypropyl methyl cellulose (HPMC), produced from either refined cotton or wood pulp meal. It is partly methyl and partly polyhydroxypropyl ether of cellulose, which is produced by alkalinizing cellulose and then etherifying it with propylene oxide and chloromethane. HPMC has thermal gel properties, its solution has no ionic charge, does not interact with metal salts or ionic compounds, has strong mould resistance, and good dispersion, emulsification, thickening, adhesion, water retention and glue retention properties.

Hydroxyethyl methyl cellulose (HEMC) is produced slightly differently from HPMC. The chemical structure of HEMC has more hydrophilic groups than HPMC and is therefore more stable at high temperatures and has good thermal stability. It has a relatively high gel temperature compared to the common HPMC cellulose ether, which is an advantage in high temperature applications. Like HPMC, HEMC has good mould resistance, dispersion, emulsification, thickening, adhesion and water and glue retention properties.